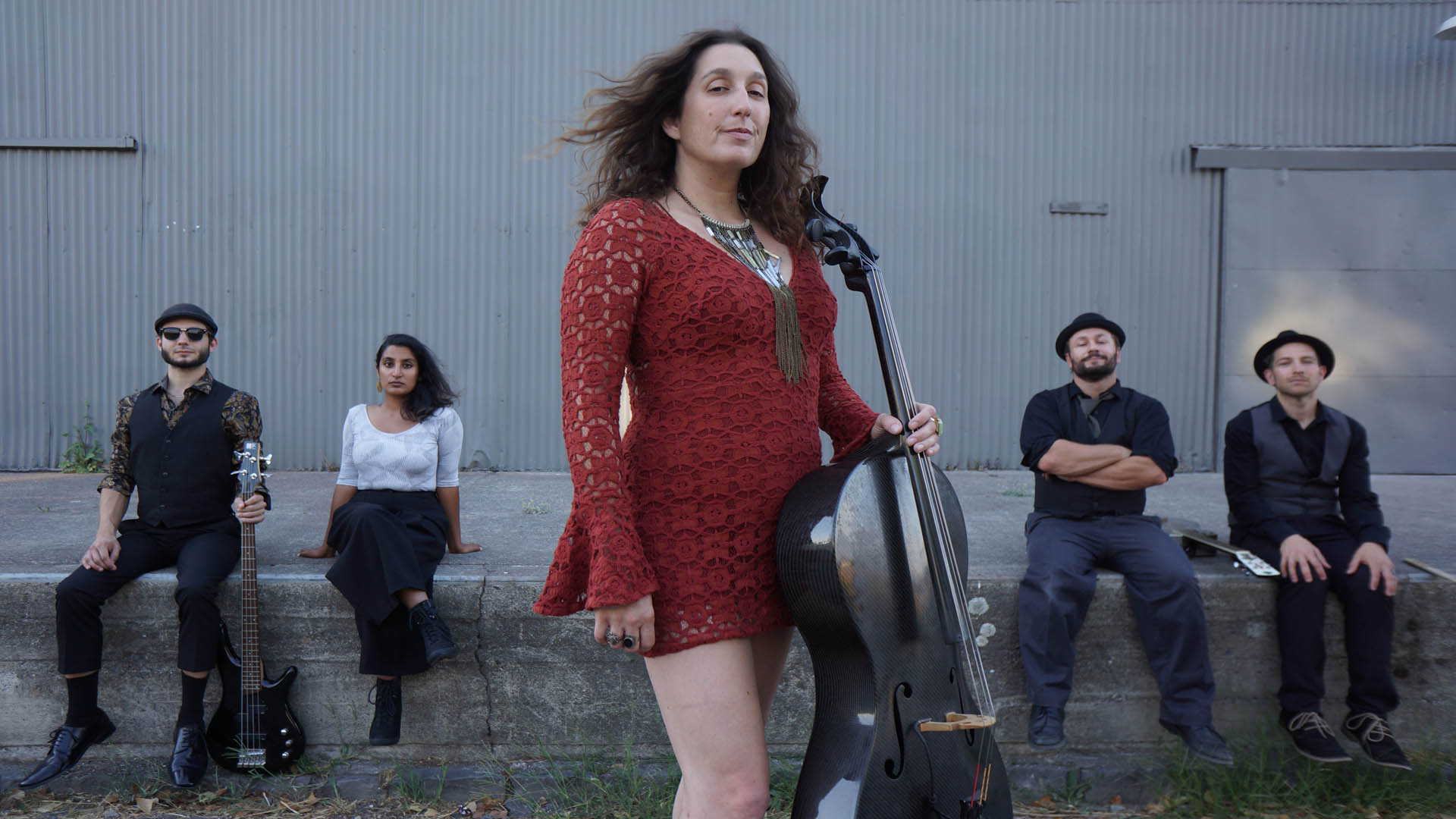 Dirty Cello
From Iceland to Italy, and all over the U.S., San Francisco based band Dirty Cello brings the world a high energy and unique spin on blues, rock, and Americana. Led by vivacious cross-over cellist, Rebecca Roudman, Dirty Cello is cello like you’ve never heard before. From down home blues and rock with a wailing cello, to virtuosic stompin’ Americana, Dirty Cello is a band that gets your heart thumping and your toes tapping!
https://www.dirtycello.com/
https://www.facebook.com/dirtycellomusic
https://www.instagram.com/dirtycello/

“The band plays every style imaginable, and does some fantastic covers. (Their rendition of “Purple Haze” is incredible.) But what is most spectacular about them is hearing the depth of soul in Roudman’s playing—it goes beyond what most people would expect from the instrument. She plays it with so much heart, you’ll wonder why more bands don’t have a cellist.”
—Good Times Santa Cruz

“A five-piece string ensemble that truly pushes the envelope and breaks the barriers, they blend blues, bluegrass and world music sounds with roots in the world of European classical music in a style that is unique and refreshing.”
—Cloverdale Reveille

“The group seamlessly careens from blues to bluegrass and rock in a way that really shouldn’t make sense but somehow does.”
—LA Times

“The ensemble plays a range of eclectic tunes in ways you won’t hear anyone else dare to attempt.”
—Argus Courier

“Anyone who’s been in an audience when the San Francisco Bay Area Dirty Cello takes the stage knows that something unique happens whenever cellist Rebecca Roudman and ensemble come face to face with living, breathing (and whooping and shouting) fans.”
—Strings Magazine

“Dirty Cello has been hard to describe, apart from saying that a cello (played in ways you won’t quite believe) is involved, and the range of music takes the word eclectic and supercharges it to meltdown levels of energy and invention.”
—Argus Courier

Sebastian Saint James‘ years of self promoted touring, grinding it out on sidewalks, in bars, clubs, theaters, on festival stages and just about anywhere else someone can make a buck playing original music is starting to pay off. His work ethic and drive is making this North Bay native a fast rising star beyond local circles and his ever growing fan base gives him no reason to slow down. Inspiration and his continued pursuit to share messages of love and longing mixed with an edge that stems from part vintage – part modern approach to writing and production there’s no telling, but the best is yet to come for this young writer.
https://sebastiansaintjames.com/
https://facebook.com/SebastianSaintJamesMusic/
https://instagram.com/sebastiansaintjames/

To register for this event please visit the following URL: https://www.eventbrite.com/e/dirty-cello-and-sebastian-st-james-at-the-somo-redwood-grove-tickets-297394012497?fbclid=IwAR3iKy63igJ8AWXoKH3dN32rAsctXjF3aXvg_IV4xt4n6RiKCeihPtMJVOE →