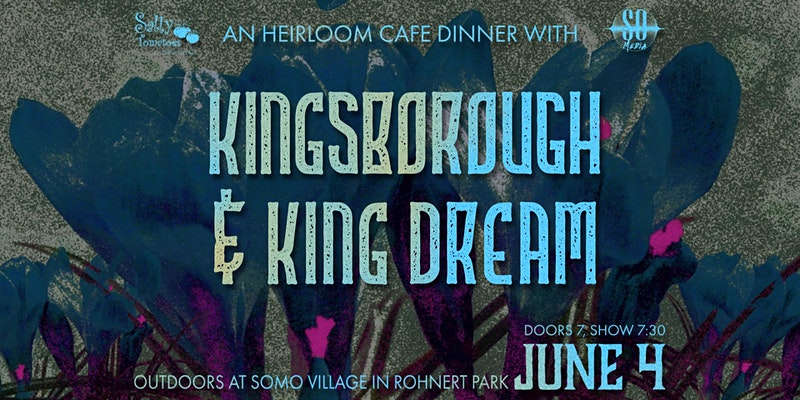 Frontman Billy Kingsborough and lead guitarist Alex Leach of San Francisco’s Kingsborough are determined to connect with audiences both on record and on stage. Influenced by the sounds and songwriting of The Beatles, The Black Keys, and Led Zeppelin, Kingsborough form a bond with fans by unleashing a brand of potent rock n’ roll that No Depression calls “laced with a vintage elegance that appeals to an ever-changing audience.”

Curated by Bryce Dow-Williamson of Second Octave, Railroad Square Music Festival, SOMO Concerts, and The Mystic Theatre, this pop-up series brings a safe live music experience paired with locally sourced meals and a cozy atmosphere under the redwoods. $10 of each ticket price goes to the meal cost for patrons. Tickets sell in pairs and groups of four or six, so audience members can enjoy these evenings with their pods. Each night has a limited 200 capacity and tickets start at $30 each, going up to $35 ten days before the performance.

To register for this event please visit the following URL: https://www.eventbrite.com/e/kingsborough-and-king-dream-at-somo-grove-dinner-series-tickets-150139225465 →