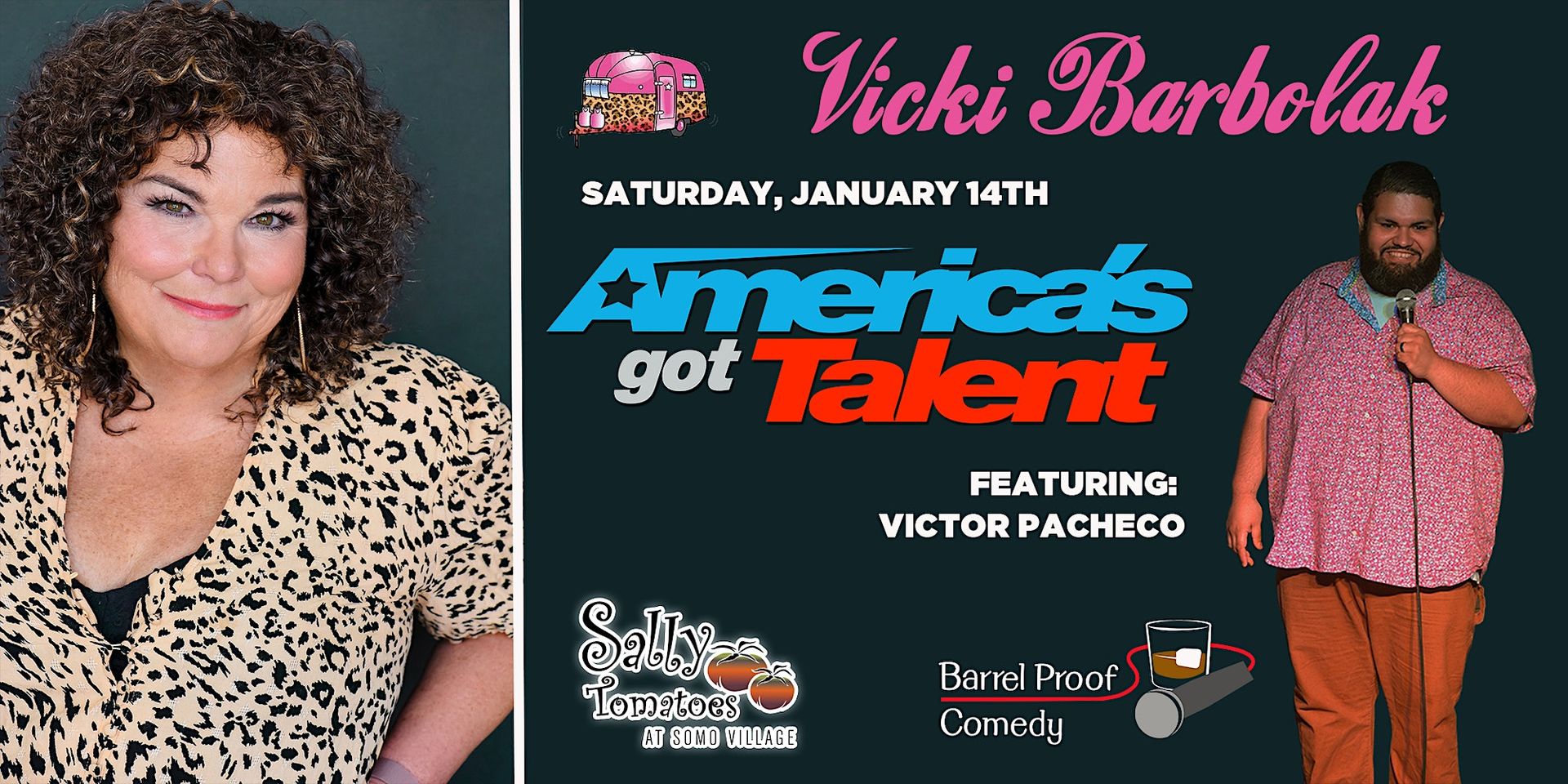 Don’t miss Vicki Barbolak LIVE at Sally Tomatoes in Rohnert Park!
You’ve seen her on America’s Got Talent. Now see her live in your own backyard!

Vicki Barbolak
Vicki Barbolak is one of America’s funniest comedians. She was a fan favorite and top 10 finalist on Season 13 of America’s Got Talent on NBC. Howie Mandel told Vicki and America, “I think you just came up with your own sitcom, you’re wonderful I love you.” And Simon said, “I think you’re the best comedian we’ve had on this show.” Vicki was also featured on the 2019 AGT Champions show.

When Vicki was 38 years young, she saw an ad for a stand-up comedy class. That class changed her life. Vicki quickly realized that making people laugh gave her more happiness than she ever dreamed possible. After a few years of open mic nights, Vicki was taken under the wing of Mitzi Shore, owner of The Comedy Store where Vicki developed as a Comedian. E! Entertainment, in its True Hollywood Story of the Comedy Store and its owner, Mitzi Shore, predicted Vicki would be the next “breakout star” to come out of that famed institution.
Drawing on her roller-coaster life of working in a family carpet business owned by her dad, a former Pittsburgh Steeler, dueling with ex-husbands who think alimony is an Italian ice-cream flavor and raising two great kids all while living in the ultra posh Vista Manor Trailer Park near San Diego. Vicki has created a comic persona that has earned her well-deserved praise. She is considered unique both in the character she has created as well as the fresh material she consistently delivers.

In 2007 Vicki won Nickelodeon’s “America’s Funniest Mom” show hosted by Roseanne Barr. Roseanne was so impressed that she hired Vicki as one of her writers and requested that Vicki open for her at the New York New York Casino in Las Vegas. In addition to being crowned as America’s Funniest Mom, Mark Ross and Bob Reid, Talent Coordinators for the Jay Leno Show selected Vicki for the 2010 Jay Leno Laugh Squad. Family Circle Magazine’s September 2011 Issue profiles Vicki as an Expert in Joke Telling for their feature article, “How to Do Anything Better”.

Vicki’s true story about performing Stand up at a funeral was included in Mark Schiff and Rich Snyder’s Best Selling Book, “I Killed, Road Stories from America’s Top Comics”.
Vicki was one of six comediennes winning a nationwide search for “Jenny’s Comedy Diva’s” on the Jenny Jones Show. Vicki also was the first winner of “California’s Funniest Female” Contest. Vicki is also the proud winner of the “Russian River Gay Comedy Festival.”
Since being on AGT, Vicki Barbolak has embarked on an international tour and is selling out shows everywhere.

Find all the best stand-up & trivia in The North Bay at www.BarrelProofComedy.com!