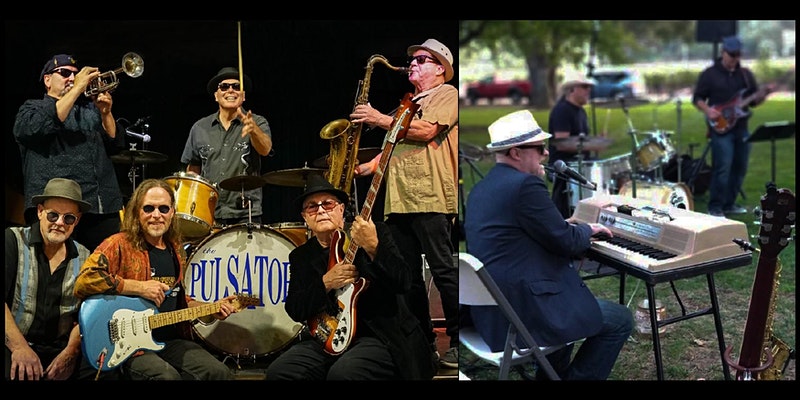 Seated and outdoors at SOMO Village in Rohnert Park

Dinner from Heirloom Café included in price of ticket.

Groups that would like to be seated together must purchase as a group.

The Pulsators formed in 1989 and released four albums over the following years. Their first CD, titled THE PULSATORS, prompted a Northern California music magazine to call them “one killer band with irresistible hooks.” The Press Democrat’s “On Q” responded to the second album, HERE’S TO YOU, with “this firecracker band proves it’s only getting better with time,” adding that The Pulsators reproduce “the hyper essence of their live shows, along with a tight professional musicianship”. The Petaluma Argus-Courier wrote that the album “captures the easy groove and good-time feeling that the band projects.”

Rooted in the fertile musical soil of the Sonoma County Wine Country the Pulsators are a five piece band that plays its own brand of music. With a get-up-and-dance kind of orchestration, their music has been defined as a spicy blend of driving blues, New Orleans-funky R&B, rock steady reggae and rock-and-roll. Their music supports an ever-growing legion of faithful fans who keep coming back for more. The Pulsators have been voted a Sonoma County fan-favorite four times in reader’s choice polls given by The Press Democrat. In the Bohemian’s music poll they won best rock band in 2009.

Swing. Rhythm & Blues. Jazz. Jump. It’s a sound that’s classic and simple, but when it’s done right, it hits the spot, and has you grinning from ear to ear. Spike has spent years searching for this sound.

From the Texas blues joints he cut his teeth in to the funky halls of New Orleans, he was always studying the music, trying to find just the right recipe. It makes perfect sense that he found his bandmates in Sonoma County, a music scene that has fostered many eclectic artists for decades.

To register for this event please visit the following URL: https://www.somovillage.com/wp-admin/post-new.php?post_type=event_listing →