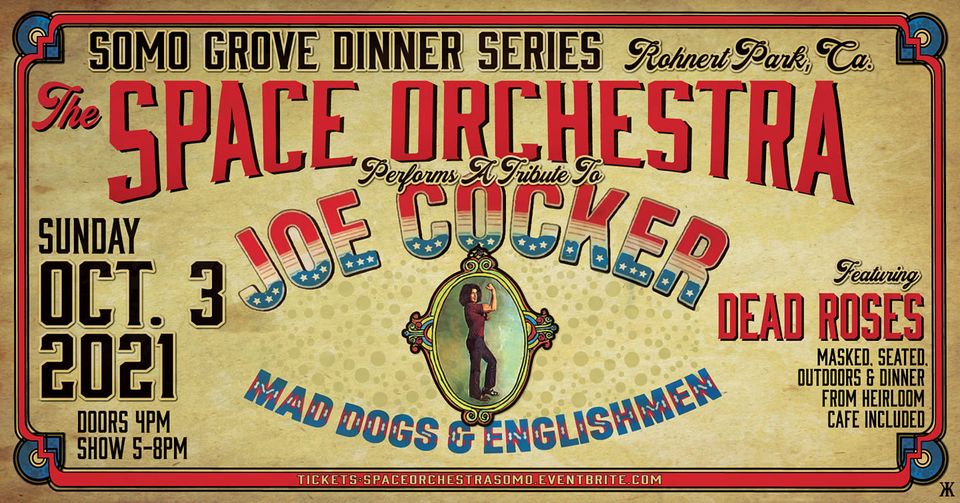 Masked, seated and outdoors at SOMO Village in Rohnert Park
Dinner from Heirloom Café included in price of ticket.
Groups that would like to be seated together must purchase as a group.

On a cosmic night in April 2018, fourteen North Bay musicians took the stage in front of a sold-out crowd to recreate the legendary night in March 1970 when twenty stars converged at New York’s Fillmore East. Featuring songwriter Leon Russell as bandleader and up-and-coming British vocalist Joe Cocker, the New York show was recorded and released as the live album Joe Cocker: Mad Dogs and Englishmen, now a rock-and-roll classic.

Like the original, Petaluma’s Space Orchestra is an eclectic mash-up of all- stars known for their stellar work in other top Bay Area bands. With a three-piece horn section, four back-up singers and a powerhouse rhythm section of two drummers plus a percussionist, the group recreates the mighty sound of the live album, in exact order, side A through side B.

Husky-voiced Sebastian Saint James of The Highway Poets brings Cocker’s lead vocals roaring back to life, driving the band through hits by the Rolling Stones, Isaac Hayes, Otis Redding, Bob Dylan and more. Highlights include Delta Lady, Space Captain, Feeling Alright, and an unforgettable version of She Came in through the Bathroom Window. This is big sound at its best.

Dead Roses (Formerly Dead Bugs) is Petaluma’s premier Grateful Dead cover band. What they bring is a unique energy that captures the vibe of late 80’s stadium shows and also the mid 70’s crispness that The Dead were known for. Headed by guitarists Todd Bugbee (Flytrap, The Melt) and Zach Jones (Lovin’ Dead), the band is quickly making a huge mark on the jam scene.

“Our goal is to give the crowd just a percentage of the feeling you had going to see the Dead back when Jerry was alive. We just want to tap that energy and channel it, funnel it to the crowds. They are the ones carrying the torch, our goal is to be a conduit.”

To register for this event please visit the following URL: →